Muscles tighten, the heart pounds and nausea takes hold: In the face of sudden stress, men and women respond alike. But when threats, scares or frustrations continue for days or months, differences between the sexes emerge.

Scientists have long known that women are more likely than men to suffer depression, post-traumatic stress disorder and other anxiety disorders, all of which have been linked to chronic stress, says Temple University psychologist Debra Bangasser. But until recently, studies of people’s responses to such stress have focused primarily on men. 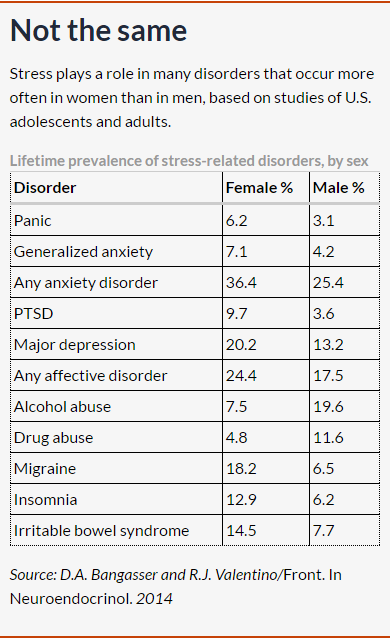 Now, a growing number of scientists are studying what happens at the cellular and genetic levels in the brains of stressed-out rodents — male and female — to gain insight into the human brain. The studies are beginning to reveal differences between the sexes that may help explain the variability in their reactions and perhaps even provide much-needed insight into why stress-related disorders are more common in women than men.

Recent findings reported at the annual meeting of the Society for Neuroscience, held in Chicago in October, show that a common stress hormone triggers different responses in specific brain cells of male and female animals. The differences make females less able than males to adapt to chronic stress.

Other studies are exploring how exposure to the same hormone influences gene expression in a part of the brain that controls mood and behavior. Still other research suggests that a different hormone, associated with trust, could render females more susceptible than males to depression, anxiety and PTSD.

“Some differences may contribute to disease and some may not,” Bangasser says. “But given that it’s early days in this understudied area, we’re already finding interesting things.”

A heightened stress response may bring an evolutionary advantage. An enhanced response to stress hormones could help females — most often caregivers for the young — remain alert and ready to take action in a stressful environment.

The problems occur, Bangasser adds, “when the system is responding when it shouldn’t be or when it’s responding for a really long time in a way that becomes disruptive.”

While no one has managed to tie findings in animals to a specific behavior in people, the studies are an important first step in understanding how sex and hormones contribute to a person’s response to stress, she says. Insights from the studies also offer hope for finding ways to better detect and treat stress-related disorders in people of both sexes.

Differences in the male and female nervous system are established early in life. In males, sex hormones are released into the brain before and shortly after birth. Later, at puberty, sex hormones — namely, estrogen and progesterone for females and testosterone for males — exert an influence on the brains of both sexes, signaling cells to turn certain genes on or off.

Fluctuations in sex hormones over a lifetime may influence the body’s reaction to stress, for better or worse. To look at that issue, Bangasser’s group studies how estrogen, progesterone and testosterone interact with a neuropeptide called corticotropin-releasing factor, or CRF, to influence cell signaling in the brains of stressed-out rodents.

CRF acts as both a hormone and a neurotransmitter. As a hormone, it orchestrates the body’s stress response. When rodents — or people, for that matter — feel threatened or experience intense emotion, the brain secretes CRF. CRF molecules then alert the body to a potential threat when they lock on to matching receptor molecules on target cells, initiating a message that travels through the nervous system: Time to pay attention and get all hands on deck.

This arousal response is a normal, instinctive reaction designed to help individuals deal with a threat. But if this system stays on for a long time, it can create a state of constant hyper-readiness (SN: 3/7/15, p. 18).

In 2010, while in the laboratory of neurologist Rita Valentino of the University of Pennsylvania, Bangasser and colleagues found sex differences between CRF receptors in the brains of male and female rodents. The study, published in Molecular Psychiatry, showed that after a stressful 15-minute swim, females had more CRF receptors on the surface of target cells, making them very responsive to the stress hormone later on. In male rats exposed to stress, some of the CRF receptors moved from the membrane to the internal part of the nerve cell, or neuron. With fewer CRF receptors on the surface, the male rodents could better cope with similar stress in the future.

Recently, Bangasser’s group found that when administered in high doses, CRF increased anxiety-related grooming in both male and female rats. But female rats groomed longer and more often. Females with the highest levels of estrogen and progesterone groomed obsessively.

Bangasser’s group is now mapping the brain circuitry involved. CRF works in several brain regions, including parts of the prefrontal cortex, a brain area linked to attention and planning; the amygdala, an area that controls fear and emotional responses; and the hippocampus, which is essential to forming new memories.

Preliminary findings from her lab suggest that CRF activates these brain networks differently in males and females. Where the female is in her hormonal cycle matters as well. Sex differences in how CRF regulates the brain may explain, in part, why women may be more vulnerable than men to stress-related conditions, Bangasser says.

When the body’s alarm system remains on high alert for long periods, stress hormones can cause modifications to DNA, says neuroscientist Georgia Hodes of the Icahn School of Medicine at Mount Sinai in New York City. These epigenetic modifications can alter gene activity in a way that increases vulnerability to depression and other mood disorders.

Hodes’ group found a way to reverse the damaging effects of epigenetic changes in the brains of female rodents. First, Hodes and colleagues transformed a brain structure in a young female rat, giving it malelike attributes, by injecting a drug that altered gene expression. The process, detailed in Nature Neuroscience last May, involved drugs that inhibit a family of three enzymes known as DNA methyltransferases, or Dnmts. These enzymes can alter the epigenetic marks on DNA, and thus gene activity, without changing the underlying genetic sequence.

Her team is now investigating how repeated stress alters patterns of DNA methylation — and gene activity — in the nucleus accumbens, located deep in the front part of the brain and involved in mood and behavior. Hodes and her colleagues exposed male and female mice to a variety of scares and frustrations over a period of days. The animals received foot shocks, were restrained in their cages or were briefly suspended by their tails. Throughout the experiment, researchers looked for behaviors associated with depression.

On day six, the female mice showed depression-like behaviors, which in mice include decreased grooming and fear of eating in a new environment. The mice also lost their taste for rewards such as sugar water and quickly “gave up” when challenged by new frustrations. It took until day 21 before male mice showed depression-like behaviors. The behavioral changes in females corresponded to changes in activity of a specific DNA methyltransferase called Dnmt3a.

The scientists then repeated the experiment, in a mouse genetically engineered to not produce Dnmt3a in the nucleus accumbens. Similar to resilient male mice, stressed females without Dnmt3a engaged in grooming, showed a preference for sugar water and were willing to eat in a novel environment. Findings from the study, published in the Dec. 16 Journal of Neuroscience, suggest that the removal of Dnmt3a increased the expression of genes that enabled malelike coping behaviors in the females, Hodes says.

Drugs that inhibit Dnmts are used to treat certain cancers in people, and have shown promise as medications for the treatment of mood disorders. Hodes says the findings suggest that, at least for depression and anxiety, it might be better to develop an inhibitor that just targets Dnmt3a.

“Alternatively, we can now start to examine some of the targets of Dnmt3a such as the CRF pathway and try to focus on developing a therapeutic that would act upon targets within that specific pathway,” she says.

At the University of California, Davis, psychologist Brian Trainor has found clues to how another hormone contributes to differences in the way males and females handle stress. The results suggest that a hormone  important for social bonding  may have a dark side.

Oxytocin, known as the warm, fuzzy hormone, has been shown to slow heart rate and promote feelings of well-being. Clinical trials are under way to test the effects of a nose spray containing oxytocin on a variety of conditions, including depression, drug dependence, migraines and pain. But studies in Trainor’s lab show that elevated brain levels of oxytocin may stir more anxiety in female mice than in males after stressful experiences.

After being housed with an aggressive mouse for brief periods over three days, male and female mice alike exhibited elevated oxytocin levels in certain brain regions. And for days, both froze in fear when encountering an unfamiliar mouse. Two weeks after clashing with others, males resumed near-normal behavior around unfamiliar mice. But females remained fearful long after the event, avoiding interaction with strangers for 10 weeks. The findings were published online October 19 in Biological Psychiatry.

Examinations of brain tissue 10 weeks out show that getting bullied by a stranger increases the total number of both oxytocin-producing neurons and overall oxytocin production in a brain area in females, but not males. This area, the medioventral bed nucleus of the stria terminalis, is a primitive region located near the hypothalamus. Involved in regulating anxiety-like behaviors, this brain area can induce aversion to places or situations linked to stress, Trainor says.

January 10th, 2018|Uncategorized|Comments Off on HIS STRESS IS NOT LIKE HER STRESS

All relevant information regarding COVID-19 can be found on sacoronavirus.co.za